IT Automation Without Boundaries

Boundaries posed within Microsoft SQL Server may be decreasing your IT agility. Here is our list of the top 3 SQL Server automation issues that are slowing DBAs down:

If any of these issues sound like something that you or your IT team have commented on in the past, it may be time for you to learn how to both increase the power of SQL Server, and extend that power throughout your entire IT environment.

Many SQL users benefit from building and automating workflows using SSIS and SQL Server Agent. However, many organizations today are using a wide variety of systems and applications, so the ability to build workflows that bridge non-SQL systems, and the ability to chain SQL Server Agent jobs have become increasingly necessary capabilities in IT today. This has the potential to cause issues for SQL users however, as the capabilities of SSIS and SQL Agent are narrow in that they solely span SQL Server Processes.

Why is this a problem? So much is going on in the world of IT and IT teams have more applications, technologies, systems, and platforms to manage than we’ve ever seen. This number only continues to increase. Processes like SSIS packages need to be incorporated into workflows alongside your different layers of automation, your Managed File Transfer, Big Data, IT Process Automation, and various other processes, quickly and easily, without having to write extensive custom scripts. Additionally, IT needs to be able to chain SQL Server Agent jobs together so that jobs can trigger one another, essentially creating event-driven automation. This would allow DBAs to break down step-heavy jobs and give them the ability to hold off on triggering a job until a previous workflow is completed, for example waiting until an SSRS report is generated and the data is ready to be used elsewhere. When using SSIS and SQL Server Agent to build and automate workflows, incorporating SQL processes into workflows with non-SQL processes will often require the developer to write extensive custom scripts that must be managed and maintained, because like most applications, SQL Server has boundaries when trying to instantiate downstream processes to manage dependencies or pass data.

Extend the Power Throughout Your IT Environment:

IT teams can benefit from a solution that can provide them with a unified approach to their entire IT environment. The right IT automation solution can provide prebuilt, drag and drop integrations for commonly scripted actions and functions, commonly called Job Steps or actions. This drastically reduces the need for extensive custom scripting to build workflows and makes it simple to drag and drop SQL Job Steps next to any other type of Job Step for any application, virtually eliminating the difficulty of bridging the gap between different technologies. The right solution will also improve reusability by providing functionality that can reduce the need for writing the same logic for multiple jobs or using a copy/paste feature to replicate it. In ActiveBatch IT Automation, this functionality can be seen in reference functionality and variables. Reference functionality allows users to reuse, rather than rewrite workflow logic. For example, if a user wants to run a job in hundreds of different workflows, they can utilize reference functionality to designate a single job as a “template” job, and create as many difference “reference jobs” that mimic the same logic of that template job. This way, if they need to make a change to the process, only the template job will need to be changed, and then however many reference jobs were created to mimic it will automatically update with the new logic.

Similarly, the right solution will provide users with variable functionality, allowing users to designate a value to a specific variable name and substitute this variable into workflow job properties. These variables can be designated as constants, and can also be populated while jobs are running to pass data to downstream jobs. Variables can be used to pass or share data within different components of a workflow. This can benefit users because instead of having to hard code a directory value for example, a variable can be assigned and the value can be automatically populated from a variety of sources. Variables are similar to references in that users can change the variable value, and that value will be reflected in any workflow where the variable was placed which saves users time and effort instead of having to go in and re-code various different components of their SQL or non-SQL workflows. 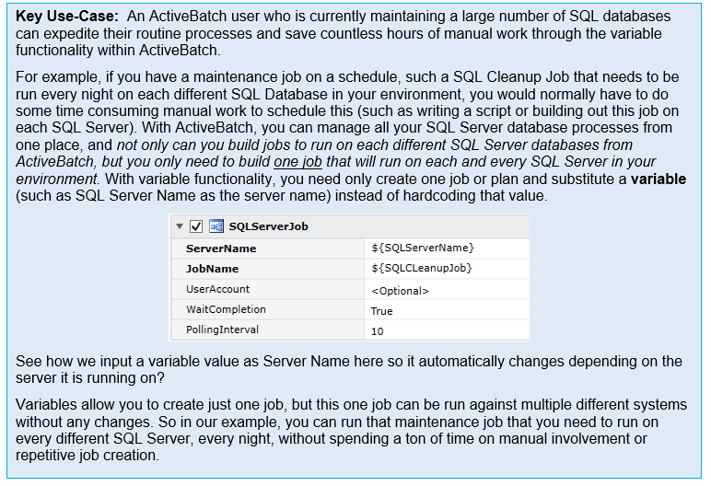 The ability to quickly and easily incorporate SQL processes with any other application or technology and chain SQL jobs across different SQL systems is becoming even more critical, and the enhanced capabilities in alerting, auditing, policies, triggering, scheduling, and more, that an automation solution provides can transform your processes and extend the immense power of SQL throughout the organization.

Learn more about how the right IT automation solution can enhance your SQL Server automation capabilities in our brand new, free white paper:

Gartner's IT Automation Predictions for 2019

Is IT lagging behind surging workloads and evolving business needs?

There's a solution for that.

Let Us Know What You Thought about this Post.

Gartner expects digital transformations to take twice as long and cost twice as much as projected over the next year. We...

Low-Code IT Automation: The Path to Unified Orchestration

IT has a lot on its plate and demands are only increasing. Complex scripts tie together disparate systems – some systems...

IT Automation's Role in Digital Transformation

How IT Can Lead Digital Transformation Digital transformation is critical for business success, and the reason for this ...

Working on something extraordinary? Get the mundane out of the way with intelligent IT automation.

ABOUT THE IT AUTOMATION BLOG